Travelling in Madagascar without seeing its extraordinary natural richness is entirely a missed opportunity – and talking about Madagascar without giving some highlights about its beautiful and unique fauna and flora is not complete. Madagascar is actually an unusual tourist destination as many things cannot be experienced anywhere else. They exist only on this most unique island.

With Cactus Tours, you will be get in the very heart of the nature of Madagascar. Our tours are eco-friendly and you will take the most advantage of your journey and holidays in the most sustainable way possible.

“It is undeniable that Madagascar is a very special island for its exceptional wealth of biodiversity, its unique flora and fauna, which make our country one of the world’s foremost nature sanctuaries”

– IUCN – the Lemurs of Madagascar

Part of the African continent, Madagascar has kept an important living heritage of some of the world’s natural history. Cast adrift from the Gondwana supercontinent about 165 million years ago, Madagascar became an island and nearly 85 per cent of its flora and fauna is found nowhere else in the world. This high endemicity level of species is due to its long history of isolation. The Island laying about 400 km from the southeast cost of mainland Africa, has an incredible wealth of biodiversity and many of them have not been inventoried yet. Scientists continue to discover new species of plants and animals each year. Madagascar is now considered as a gene bank of biodiversity for humanity.

The Wildlife of Madagascar

Of the 101 native mammals of Madagascar, nearly all are endemic to the region. It is exceptional to have such an abundance and variety of species. Lemurs are one of the most well known of the Malagasy mammalian species. They are among the most primitive of living primates. The study of lemurs allows scientist to learn all about primates’ life-story traits, behaviors and ecological evolution. Many species of lemurs have been found during the two last decades. Many of them are extremely rare and are on the verge of extinction. Madagascar’s mammals differ from Africa’s due to the lack of big game which act as predators.
Fossa Predatr Madagascar
Catta Lemurs – ring tailed
p_00031
Fruit bats of Madagascar
Madagascar brown lemurs
Sifaka lemurs – Madagascar
Giant Rat in Madagascar
Indri Indri

99% of the existing species of amphibians in Madagascar are unique in this micro-continent. Scientists’ inventories show about 300 species in Madagascar. About 4% of the world’s amphibians are found only here. That makes Madagascar one of the world’s biodiversity hot spots. Among the 346 known species of reptiles, 314 are unique to Madagascar. The followings are considered the most famous and unique to the island: giant tortoises, radiata tortoises, geckos (including the Uroplatus) , leaf-nosed snakes, the Menarana (snake), and chameleons. 11 families of existing reptiles are present in Madagascar and one of them is endemic.

The flora of Madagascar has a very high rate of endemicity. The floristic species of the island are not yet well known. They represent a remarkable diversity due to the wide variety of soil types, elevations and microclimates. Besides its high endemic rate, Malagasy flora has become more and more known because of their medicinal qualities. Scientists have been doing inventories since 1936. The number of vascular flora of Madagascar has increased from 7370 species into 12000 species with an endemism rate of about 85 percent. 96% of the trees and large shrubs of Madagascar are unique to the island. 40% of the known palms are endemic. Even though Madagascar and mainland Africa are so close to each other, scientists have encountered a major difference as many plants families are totally absent in tropical Africa. With regards to different elevations as well as microclimates, Madagascar is divided into seven geological areas for the classification of its flora: – The rocky highlands including the Western slopes – The Western deciduous forests – The Central grasslands – The Southern spiny bush – The Sambirano areas – The Eastern and Central forests – The Eastern evergreen forests. Here are the most famous of the Malagasy flora: the Aloes (more than 34 species), the Pichter Plant, Baobabs (7 species), the Periwinkle (anti-cancer), the Cacti including the Didiereaceae and Alluaudia, the Pachypodiums, Lalonas, Bamboos, Ferns (more than 100 species), Palms (more than 170 species), the Ravinala, the Pandanus, Orchids (more than 1000 species).

The protected areas of Madagascar are managed by the Association of the Protected areas Management which has become “Madagascar National Park” – MNP since late 2008. These areas are classified as follows: – National Parks: for preserving both natural and cultural patrimony with interest for both the public and for scientists. – Special Reserves: for protecting specific ecosystems or particular endangered species. – Strict Nature Reserve: for the conservation of specific ecosystems. Access is strictly forbidden without permission from the authorities.

The Fady or Taboos

Taboos help to preserve Malagasy nature. When a forest, an animal, a plant or an area is “Fady”, nobody will touch it because of the fear of the ancestors or of God. Several areas of the Island remain untouched because of this belief.

See before it disappear >>

In spite of the efforts of many organizations and the Government itself, Madagascar’s wildlife tend to disappear quickly due to the massive destruction of the natural habitats.

Through its national commitment, initiated by H.E Marc Ravalomanana, Madagascar has a road map for its development, including the preservation of the environment.

Madagascar will be a world leader in the development and implementation of environmental best-practice. After many decades of exploitation and neglect, we have begun to turn the tide. We will become a “green island” again. Our commitment is to care for, cherish and protect our extraordinary environment. The world looks to us to manage our biodiversity wisely and responsibly – and we will. Local communities will be active participants in environmental conservation under the guidance of bold national policies. Given the Government’s vision – Madagascar Naturally – we will develop industries around the environment such as eco-tourism, agri-business, sustainable farming practices, and industries based on organic and natural products. These industries and activities will minimize biodiversity damage and maximize benefits for the nation and the people”

One visitor’s thoughts and opinions.

” Madagascar is a fascinating country with so much to offer but also with so many challenges to face. Many thoughts questions were raised during my time there e.g can tourism develop without a negative impact on the environment; can the population’s living standard equally improve without damaging the unique fragile environment; can the destroyed/compromised environment be regenerated ? by Carole B. Canada/Thailand “

The extraordinary wonders of nature
—- 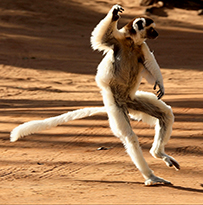 Previous
Next
Make an enquiry